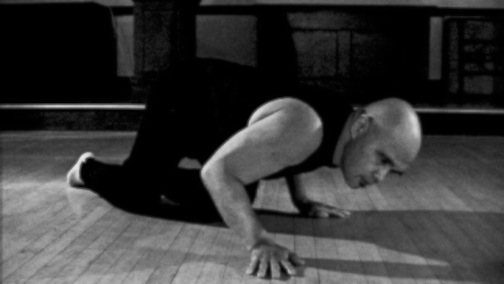 NOTE: In this Paratheatre medium, the Body is approached as an embodiment
of the Subconscious. In this work, we gain access to the Body's internal landscape
of impulses, emotion, images, archetypal currents and sensation, after meeting
the Body's need to be felt deeply.

Feeling the Body deeply can occur during a preliminary 25-minute physical warm-up
which starts each session. Sample sessions are outlined in my paratheatre workbook,
"Towards an Archeology of the Soul". The following trigger methods can be applied
and tested during each work session (an hour for solo work; 2-3 hours for group work).
- Antero Alli

THE FIVE INTENTIONS:
- Merging (identification; becoming the source)
- Service (expressing source through you without identification; body as vessel)
- Surrender (full-body offering of self to source; total embodiment)
- Sustaining Care (sustained by what I love most about source)
- Inquiry (asking questions of the source)

Hollow Body
Sense of emptying to amplify No-Form; sensing the physical body as hollow, as in, a vessel or medium.

Sourcing
From the receptivity of no-form, sourcing refers to the inner action of detecting, accessing, engaging and expressing sources of energy in the body/psyche that leads to full immersion, identification, and surrender to direct experience (or gnosis) of that source.

Conscious Projection
The conscious act of projecting a source of energy into an area on the floor and/or outside of the body and then, physically stepping into that source area to subject yourself to the forces of your own projection. This inner action taps the otherwise unconscious reflex of projection of psychic energy onto others and the world happening almost all the time without our awareness (unconscious). By making this unconscious process conscious, a ritual technique is born enabling the action of charging an area with a specific energy.

Foundation Source
Executed before the physical warm-up cycle, a single source is chosen and projected onto the entire workspace while standing in no-form at the periphery of the workspace. FRom No-Form, you step into the space to engage that source and and its expression through you as you navigate the workspace. The foundation source has three purposes: 1) activating the energetic body 2) setting a tone for the following Physical Warm-Up and 3) creating an underlying support source for the entire Lab session.

Identification into Service
When fully immersed in any given source, we 'become' the energy through identification. This often results in a state of surrender to that source. Service expresses a shift from identification to serving its expression through you - through the physical/vocal instrument. This internal shift can liberate a greater circulation of force, ing in a more economical, specific, and playful spirit in the tone, movement, and actions of your expressons.

Active Surrender
When giving oneself over totally to any given source, a state of surrender ensues. Passive surrender tends towards internalization of experience, where outer expression is muted in a kind of caving into oneself. Active surrender allows for a more dynamic outward expression of forces.

Receptive Control
The act of maintaining receptivity to any given source while directing and managing its influence through physical and vocal expression; holding a dynamic balance between spontaneity and precision, contol and abandonment.

Human Systems
Sourcing a series of existing biological systems -- Skeletal, Muscular, Nervous, Respitory, Circulatory, Glandular, etc. -- to yield to the living realities of these systems in the Body, rather than our concepts about them. Also used for expanding movement vocabulary beyond existing cliches and redundancies.

The Adult/Child Contract
Setting up a polarization ritual (see next Inner Action) between the Child and Adult functions of the Self where the Adult initiates an agreement to protect the Child in the event of any oppression to the creative spirit by threats of shaming, blaming, ridicule, abuse, and judgmentalism on the self &/or on others. Once maintained, this internal contract results in enough self-trust during the greater intensities of performance and heightened creative states.

Ritual Polarizations (aka polarity ritual)
This ritual begins with selecting a charged polarity of opposing sources and then, designating two areas on the floor to each source. In personal polarity work, this occurs within your private area or circle. In group polarity work, the entire ritual space is divided in two. From No-Form, enter one area and subject yourself to that source and then, enter the other source area. By physically traversing between both areas, sourcing each force as you go, a balancing of inner energies occur and a neutralizing of excess charge innate to either or both sources. Polarizations increases flexibility in the ego (self-image). Click this for a list of polarities. 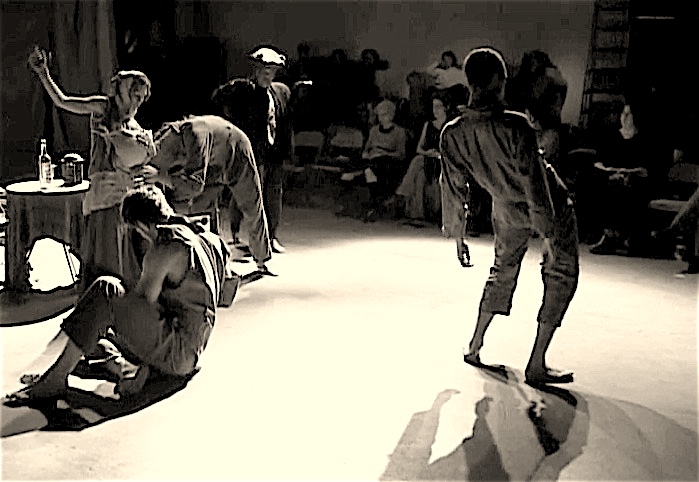 from "Orphans of Delirium" performance (May 2004, San Francisco)

Space Forming
Moving throughout the workspace after it's been invested with a value, such as space as "sacred" or as "intelligence" or as "love". Space forming occurs by physically communicating one's relationship with the space itself, moment to moment, as one moves through the space; includes moving throughout the spaces between each other. This adjustment increases spatial awareness and supports an asocial climate at the start of a work session.

Presence Actions
Any action, movement, sound, song or physical adjustment that increases the felt, palpable sense of one's own energetic presence, the aura enveloping the physical body. A device for generating a self-reflexive experience of one's own energy, our "field of presence".

Body as Unit
Moving the body as one unit, as one piece, with no part left behind or isolated from the rest. Much like the way a cat moves across the ground or floor, no part of the cat body is "left behind"; the cat moves as a unit. Body as Unit incorporates the whole body in motion; like the cat, the movements do not need to be large or dramatic to express unity of the whole body motion.

Somatic Questions
The following three questions are asked of oneself, one at a time for a few minutes each -- outloud or in silence: 1) Why am I here ? 2) Where am I going ? 3) Who am I now? These questions are asked to invoke somatic response, not any mental conclusions or answers. Somatic questions can help liberate the body's stream of impulses at the start of a lab session.

Movement Cliches
Time set apart for allowing the expression of redundant movement habits and predictable kinetic patterns towards their full exposure and acceptance. To expose and identify one's movement habits and cliches as the 'default setting' we fall back on whenever new movements cease to be discovered.

Idiosyncratic Motion: Movement Vocabulary Work, cont.
The action of allowing whatever state you're in to dictate the expression of movements innate to that state; moving in ways innate to your own energy that cannot be duplicated or copied.

Aimless Wandering (wu wui)
Walking about the space without intention or any purpose beyond getting lost in a shuffle of aimless wandering.

The Rises
Lying down on the floor and rising to a vertical stance using minimal effort, tension and resistance. The point of the rises is to expose any tendency to force or push a movement. Doing the rises brings awareness to gravity as a propellent for motion and achieving physical verticality with minimal effort. After reaching a vertical stance, we fall back to the floor and repeat the process. Rises should be performed at least five times from a different horizontal floor position each time we fall to discover new rising pathways to the vertical stance.

Non-directional jogging
Jogging around the periphery of the workspace while relaxing the mental grip over the physical body. This action releases inner and outer tensions and residual energies from sourcing towards achieving an overall ragdoll looseness in the muscular, skeletal, and nervous systems.

Jogging Forms
Various jogging forms acts as mediums to find or create specific transitions, like a a "heat jog" to raise body energy or "maintenance jog" to sustain the heat and presence previously accumulated. Jogging forms are used to begin sourcing and activating the energetic body; "the No-Form jog", "the Verticality jog" and "the non-directional and directional jogs".

Follow-through
The result of allowing any movement, sound, solo or group ritual process to fulfill its natural course to its end (without controlling or predetermining that outcome); to fully extend any direction to its natural outcome

Ritual Actions
Advanced level work ~ where a given source is expressed through actions and gestures articulating the innate purpose or function of that source. click this for more details