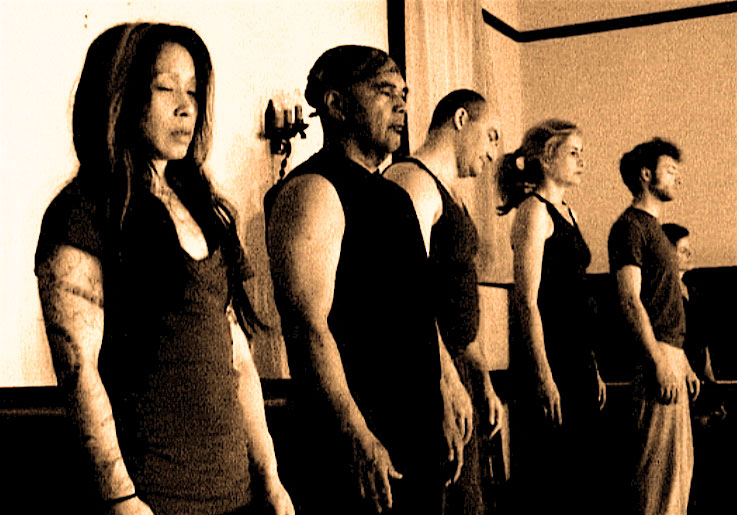 The Dreamer and the Dreamed
In our night dreams we become aware of a "dream self", a dreambody, engaged in various activities and relationships in the dreams we inhabit. According to many aboriginie tribal people, when we awaken each morning our dreambody went to sleep to dream us awake. We wake up thinking we've stopped dreaming -- nobody stops dreaming. We are the Dreamer and the Dreamed; we dream and we are being dreamed. From an aboriginal point of view, the presence and power of the dreaming permeates the vast Daytime/Dreamtime continuum.

How This Ritual Came About
I discovered this dreaming ritual one morning in 1986 when I awoke with the memory of a movement in my dream that I immediately replicated in bed. When I repeated the movement at random intervals throughout the day I noticed images and the spirit of the dream flooding my consciousness. Over the following week, I found two more dream movements from my dreams and joined all three into a movement cycle, a kind of choregraphy that could be repeated. I was surprised by the results of this ritual choreography. It sent me into a trance state, a dream state, while fully awake and while in physical motion.

On Meeting an Aboriginie Elder
The following year I met Aborigine Koori, elder Guboo Ted Thomas (see my interview with Guboo) who initiated me to a new way of seeing the Earth as a vast dreaming entity incarnating as this planet dreaming its inhabitants into existence. Applying Guboo's big picture vision of the Daytime/Dreamtime continuum startled my assumptions and enlivened my dreaming ritual in ways I could never have discovered on my own. 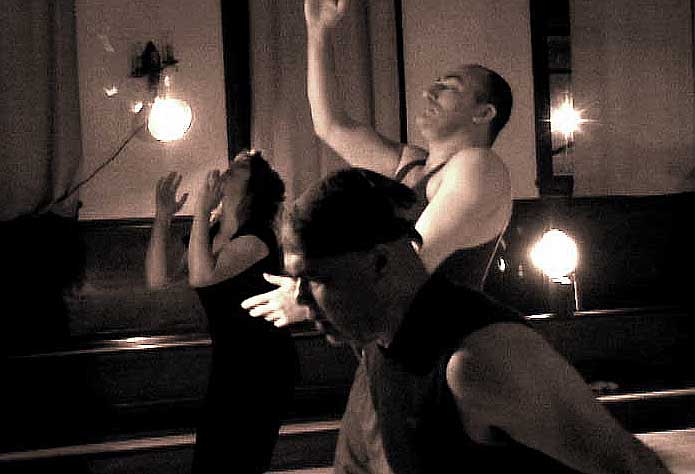 Ritual Without Dogma
This dreaming ritual represents a non-interpretive approach to dreamwork. It does not require any analysis or translation of the dream or what the dreams might mean. By relaxing the search for meaning, the dream's innate meaning has a better chance of surfacing and making itself known. Dreams carry their own stories, their own secrets. There is also nothing you need to believe or disbelieve for this ritual to work. You simply have to do it and experience the results for yourself.

The Dream Movements
The first step is to recall a movement from your dream. As you lay down to sleep, ask yourself to remember a dream movement. If you remember a movement on waking, execute it immediately. If and when your dream recall falters, lie still for a few minutes. Maybe something will appear to you. This movement can be anything in your dream that moves; a windblown cloud, a slithering snake, the slightest turn of your head or someone else's arm. This movement does not have to be executed by your dreamself; it just has to originate in your dream. However, the movement you select must be a movement you can physically repeat after waking. You will eventually need at least three movements but no more than five movements. It can be from the same dream and/or from different dreams; too many movements can over-complicate the ritual, so keep it simple.

As you do your movement, do not embellish it; stay as close to the movement as you remember it in your dream. This can help contain the innate power of the dreaming embedded in the movement itself. You see, the movement you're performing did not originate in the physical world but as an energy form in your dream. As you perform your movements, they may start triggering memories and/or emotions associated with your dreams. If this happens, let them come and go. Do not try and analyze what they mean.

On Ritual Preparations
After practicing your dream movements separately, youcan begin to connect theminto a movement cycle. This initiates the mechanical stage of this Dreaming Ritual. Find or create a controlled setting -- any indoor or outdoor place where you will not be interrupted for about an hour and where there's at least ten feet by ten feet of open floor or ground space. Perform whatever actions are necessary to own the space of this setting so you feel safe and alone there. Then, start practicing each movement separately to refresh your muscle memory of the movements.

Practice this movement cycle until it becomes a fluid dance with its own rhythms. Let these rhythms subtly influence the form and design of the dance but don't let it corrupt the structural integrity of the dream movements themselves. Perform this dream choreography over and over, again, allowing its innate waves and pulses to unfold. Let any dream memories, images or feelings surface but stay commited to maintaining the integrity of the movement cycle. Practice this cycle for five to ten minutes or until you don't have to think about it; do it until it becomes second nature.