"The Voice as Instrument"
Interview with vocal artist, Paul Oertel
by Antero Alli 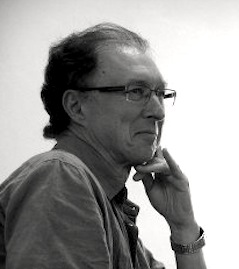 This meeting with the internationally-acclaimed voice artist, Paul Oertel, took place September 5th, 1986 in his studio in Boulder, Colorado. Onstage since he was ten years old, Paul's extensive theatrical/dance/voice background also incorporates the study of human anatomy. Since 1970, he has co-created with his wife, Nancy Spanier, numerous Inter-Media Performance pieces throughout the U.S.A. and Europe as Performance Inventions. They reside in France.

ANTERO ALLI: Speak about the value of relating to silence and how this relationship influences the quality of sound.

PAUL OERTEL: The foundations of my initial work came from Kristin Linklater, an acting/voice teacher at the NYU School of the Arts in NYC (who now resides in Scotland). The bottom line to establishing vocal technique was finding that point of no effort. We started with lying on our backs and observing breath until the breath was not being motivated by any noise whatsoever. Even if the mind continued creating noise, the actual breath was silent. This created one open channel, so that no matter how tense I am...this channel would not be interfered by my neurotic habits...physical, emotional and psychic tension. The breath itself will produce communication in silence without effort.

AA: When you work one-to-one with someone, what do you look for first to find out the most about them?

PO: What usually happens first is that there's some sense of the individual's gift and their need. That usually glimmers forth when they walk in the room. Then, after that it's mostly a puzzle. What are the overlays, misconceptions, pretensions, and blocks that made it difficult for the person to access their gift? Then come the exercises to create the experiences for breaking up the blocks and confusions...to make it certain to the person that those things are not necessary.

AA: Touch upon the conversion point between sound into movement and dance.

PO: You can sometimes use sound to unblock the issues and sometimes movement and you can play back and forth depending on where the person is most open. If the person is blocked in the physical body and they have a fairly open vocal channel, you can hook in that way. What we usually find most difficult in voice class is the value judgment about the resistance...

AA: How can one vocalize intense feeling without blowing people away? And is there a way to contain expression without diluting its power?

PO: That's a very important question. My experience is that it has to do with the relationship between space, flesh and emotional flow. For example, if a person is expressing heightened anger and their flesh is caught in it and they are totally invested in it as if that is their identity, it tears up the body...exhausts and debilitates the person. It may produce a kind of catharsis but it wipes them out and they may have to go home and sleep. It pollutes the space and they don't get much insight from the experience because they have no perspective or point of view. Therefore, what to do? In the body, we found that if the emotional flow is moving up the front of the spine but the person feels quiet and completely safe behind it then you can let anything fly and it will flow right out through an open channel out the body. The person is sitting there watching it with enough perspective that this other phenomena doesn't happen. Anatomically, we can go into the back ribs, so the person begins to feel: "Oh, there is space back there". And as they separate that space, they begin to experience the emotion in front of the space. Then they can actually sob and not feel frightened because they are behind the emotion and not in it.

AA: Let's go back to the issue of containing expression without diluting its power...

PO: It was put to me very well by an acting teacher named Olympia Dukakis, a Greek woman in New York, and she said there was three things you can do with an emotion. You can stuff it, you can throw it out, or you can experience it in your flesh. Of course, the "stuffing of emotion" produces neurosis and sickness. Throwing it out often leaves somebody devastated...someone who gets the energy. But if you take the energy and actually put it into your flesh...pour it through like a sieve, then instead of having the emotion go to the world, it goes through the muscles. In that process, it becomes refined, filtered and this produces insight which creates understanding. In the audience, this works because it lets them handle the heat.

AA: What is resonance and how does it happen?

PO: Anytime you have a space closed off or muscles that are tight, it's like filling a violin with cotton or a room with pillows. As the muscles are freed, that area then will resonate. Another thing that is interesting is that places in a person's body that will not resonate have no consciousness. Often, awareness is enough. One can point to an area in the body and by becoming more aware of the spot, its resonance will increase. So, it turns out that one can develop a whole vocal technique that is based purely on awareness...where the more aware of your physical being you become, the more your voice opens up. The flesh is really the barometer. If you look at the flesh and it's becoming open, freer, lovelier...you know something is working. If the flesh is getting tighter, tenser, hardened, shortening and space is being lost...you know it's not working. Often times people will sacrifice their intuition for a certain effect that may be more sociologically or politically acceptable. If a person learns to trust their instincts, they arrive at breath, relaxation and intuition...as well as their own personal aesthetic, integrity and individuality. They can arrive at their innate gift and ability to be of service and of use relative to their role on the planet.

AA: How do you help people get beyond their concepts and closer to their own instincts?

PO: It has to be by an experience rather than an argument. An experience has to be created that is so sensuous, so pleasurable...so wonderful and undeniably real that they don't want the other thing anymore. They make the choice. I help the experience happen. If one experience doesn't work, then others are made. I have tried to argue people down and it's futile. The mind is infinitely clever. Who am I to tell anybody what to think anyways? It's none of my business.

AA: How can the voice become more flexible and sensitive to conveying the subtleties of the human heart's song?

PO: It's a question of removing fear. As the fear is removed, the human heart's song appears. As the tensions, preconceptions and notions are removed...it's like a bird in a cage singing with all kinds of locks, cotton, mufflers and stuff around it. The whole time the bird is singing yet the person can't hear it and no one can hear it because it's all buffered. Gradually, the person starts to hear it and asks, "Is that me? Am I that beautiful?".

AA: Talk about singing with the whole body...

PO: If a part of the body is blocked or denied, it won't have awareness. As we spoke earlier, where there's no awareness there's no resonance and expression. Let's say a person feels a vibration in the head and then the emotion moves down to the buttock seeking expresion...the voice wants to drop down into there. If this person has a belt of tension through their diaphragm, then the energy drops down and hits the diaphragm and the person suddenly feels nauseous...the expression doesn't happen. So, it's a question of making all the tracks free and all the dams so the water can flow freely everywhere. It's the removing of the blocks so that the whole thing can work. There's nothing to be done or created; the creation is already there. The whole body would work instantly if there was nothing dividing it into fragments.

AA: How do you neutralize and dissipate the charge that often accumulates while performing? What do you do after the show? How do you let it go?

PO: That, of course, is a very important question. A lot of what will dissipate it is being completely open so the energy passes through. I don't lock anywhere. Any block in my body will catch the flow and I'll pick up the whole thing. I continue to express what's going on and then, there is a "process period". This is where I process the whole thing in movement for maybe weeks...months...if the experience is really a shocking one, it may run right up against my issues...then, those issues will be really hot. That's one of the reasons I perform. The performance absolutely devastates me and rocks my very core. After I have gone through that experience and having been shaken to my very soul, then there are hours and hours of improvisation where I put back together what has been destroyed in a new way. I get all the information I need from the experience itself.

excerpted from
"Towards an Archeology of the Soul"
by Antero Alli (Vertical Pool, 2003)

Back to the "Song as Vehicle" page