The Theatre and Its Double; excerpts
by ANTONIN ARTAUD

I employ the word "cruelty" in the sense of an appetite for life, a cosmic rigor, an implacable necessity, in the gnostic sense of a living whirlwind that devours the darkness; it is the consequence of an act. Everything that acts is a cruelty. It is upon this idea of extreme action, pushed beyond all limits, that theatre must be rebuilt.

Gifted performers find by instinct how to tap and radiate certain powers; but they would be astonished if it were revealed that these powers, which have their material trajectory by and in the organs, actually exist, for they never realized that these sources of energy actually exist in their own bodies, in their organs.

Psychology, which works relentlessly to reduce the unknown to the known, to the quotidian and the ordinary, is the cause of the theater's abasement and its fearful loss of energy, which has finally reached its lowest point.

The belief in a fluid materiality of the soul is indispensable to the actor's craft. To know that a passion is material, that it is subject to the plastic fluctuations of the material, makes accessible an empire of passions that extend our sovereignty.

Furthermore, when we speak the word "life", it must be understood we are not referring to life as we know it from the surface of fact, but to that fragile, fluctuating center which forms never reach. And if there is one hellish, truly accursed thing in our time, it is our artistic dallying with forms, when instead we should become as victims burning at the stake, signaling each other through the flames.

To make metaphysics out of a spoken language is to make the language express what it does not ordinarily express. It is to make use of it in a new, exceptional and unaccustomed fashion; to reveal its possibilities for producing physical shock; to deal with intonations in an absolutely concrete manner, restoring their power to shatter as well as to really manifest something and finally, to consider language as Incantation.

The true purpose of the theatre is to create Myths, to express life in its immense universal aspect, and from that life to extract images in which we find pleasure in discovering ourselves.

If our life lacks a constant magic, it is because we choose to observe our acts and lose ourselves in consideration of their imagined form instead of being impelled by their force. No matter how loudly we clamor for magic in our lives, we are really afraid of pursuing an existence entirely under its influence and sign. 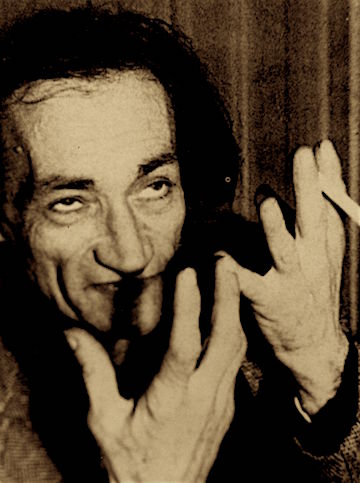 In his book The Theatre and Its Double, Artaud expressed his admiration for Eastern forms of theatre, particularly the Balinese. He admired Eastern theatre because of the codified, highly ritualized physicality of Balinese dance performance, and advocated what he called a "Theatre of Cruelty". By cruelty, he meant not exclusively sadism or causing pain, but just as often a violent, physical determination to shatter the false reality. He believed that text had been a tyrant over meaning, and advocated, instead, for a theatre made up of a unique language, halfway between thought and gesture. Artaud described the spiritual in physical terms, and believed that all expression is physical expression in space.

“The light was crude. It made Artaud's eyes shrink into darkness, as they are deep-set. This brought into relief the intensity of his gestures. He looked tormented. His hair, rather long, fell at times over his forehead. He has the actor's nimbleness and quickness of gestures. His face is lean, as if ravaged by fevers. His eyes do not seem to see the people. They are the eyes of a visionary. His hands are long, long-fingered.

Beside him Allendy looks earthy, heavy, gray. He sits at the desk, massive, brooding. Artaud steps out on the platform, and begins to talk about " The Theatre and the Plague." He asked me to sit in the front row. It seems to me that all he is asking for is intensity, a more heightened form of feeling and living. Is he trying to remind us that it was during the Plague that so many marvelous works of art and theater came to be, because, whipped by the fear of death, man seeks immortality, or to escape, or to surpass himself? But then, imperceptibly almost, he let go of the thread we were following and began to act out dying by plague.

No one quite knew when it began. To illustrate his conference, he was acting out an agony. "La Peste" in French is so much more terrible than "The Plague" in English. But no word could describe what Artaud acted out on the platform of the Sorbonne. He forgot about his conference, the theatre, his ideas, Dr. Allendy sitting there, the public, the young students, his wife, professors, and directors.

His face was contorted with anguish, one could see the perspiration dampening his hair. His eyes dilated, his muscles became cramped, his fingers struggled to retain their flexibility. He made one feel the parched and burning throat, the pains, the fever, the fire in the guts. He was in agony. He was screaming. He was delirious. He was enacting his own death, his own crucifixion.

At first people gasped. And then they began to laugh. Everyone was laughing! They hissed. Then, one by one, they began to leave, noisily, talking, protesting. They banged the door as they left. The only ones who did not move were Allendy, his wife, the Lalous, Marguerite. More protestations. More jeering. But Artaud went on, until the last gasp. And stayed on the floor. Then when the hall had emptied of all but his small group of friends, he walked straight up to me and kissed my hand. He asked me to go to the cafe with him. ”

BACK TO
"THE INVISIBLE FOREST"