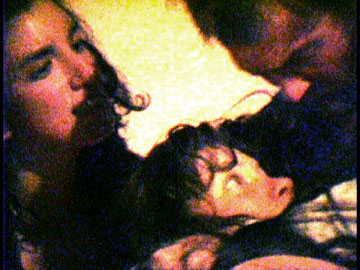 The Temple of the Animus
A Lab Report and True Story by Serene Zloof
from the ANIMA/ANIMUS PARATHEATRE LAB, 2001

The Universal Law of Attraction -- whenever I'm gettin' some (attention), everyone I encounter suddenly wants my attention. They can sense the intimate energy seeping through the skin; they can feel a sexuality that is fully engaged, and all are drawn to it. Equally, when I'm out of touch with these forces, it becomes even harder to draw touch towards me. It may seem like a cruel catch-22, but that is only if you believe, as I once did, that sexuality can only be explored with another person. Quite the contrary. I have discovered a very potent secret -- intimate contact with male energy is not dependent on meeting a man. Not when is it possible to cultivate a relationship with the archetypal male force of the universe, the Animus, who exists within every man.

It begins with a call. The building of a virtual temple charged with my energy, a request for his presence, whatever that may embody. I found that my call to him included the sounding of three tones with my voice. As I went through the process of building a temple for the Animus to visit, it dramatically changed my life and the way I relate to men. During the Anima/Animus paratheatrical lab (Berkeley, March/April 2001), I discovered that the Animus encompassed all forms of man that I have known -- brother, father, lover, son, and advisor.

My first experience with the Animus was childlike and playful -- he visited me as the boy next door, and we stomped around the playground together like brother and sister. I felt myself embodying a boy, the Animus within me. The next experience we had made me feel completely female in his presence, for it was an interaction of primal sexuality. I felt the desire to be truly submissive, even to the point of humiliation and painful pleasure. Then I experienced the sexual side of female domination, where I was some cross between sensual mother and ravaging lover. It is truly fascinating that some of our meetings made me embody the force of woman, while others had the opposite effect of filling me with the male power to make and destroy.

The stage of the lab work that followed was one of teaching. The Animus became an older man, a father figure with a mustache. The image of Socrates comes to mind because the Animus was guiding me by responding to my questions with more questions. We began to have long written conversations, where my pen would speak his answers. Soon, all of my issues about being a woman in this society -- the pressure to be a goddess on a pedestal, or a stand-by-your-man kind of gal -- were dissolving.

I could choose any role I wanted to play, male or female; a strange invincibility. The Animus told me that there was a piece of him within every man. But even if there were never any men around, he assured me that he would always be there to satisfy my need for male companionship. Three weeks after the labs ended, we were having a written conversation. I asked "Am I really ready to share my life with someone, and how much will I share? Everything? Even our conversations?"

The Animus wrote back "It's up to you what you choose to give. It is whatever you want it to be." Someone walked into the room just then. The One I would marry in a few short years. Neither one of us knew that at the time. In fact, as our intensity together rapidly elevated like wild fire, he was overwhelmed and could not continue being intimate with me. So we did the declaration of "just friends." Disappointed, I was, BUT in the grand scheme it didn't matter! He was just one face of the Animus, and there would be another.

I detached easily, to his surprise. And a few weeks later I had a hot date -- with the Animus. I got dressed up to go out, decorated my space, and built the temple, and sure enough, I received enough male energy to feel satiated. Just as our meeting was over, the phone rang. An old lover of mine inviting me out. Then the phone rang again, and guess who it was -- "Just Friends" was over. Hmmm . . . Imagine that. 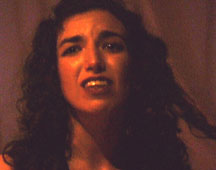 SERENE ZLOOF is a multimedia perfomance
artist and writer who resides in Los Angeles. Her music can be heard at:
www.reverbnation.com/datgirl

TEMPLE OF THE ANIMUS is excerpted from "Towards an Archeology of the Soul"
(by Antero Alli, Vertical Pool Publishing, 2003)