The Embodied Voice
Interview with Sylvi Alli, ParaTheatrical ReSearch
by Jonniemarie Gilman; May 7, 2008. 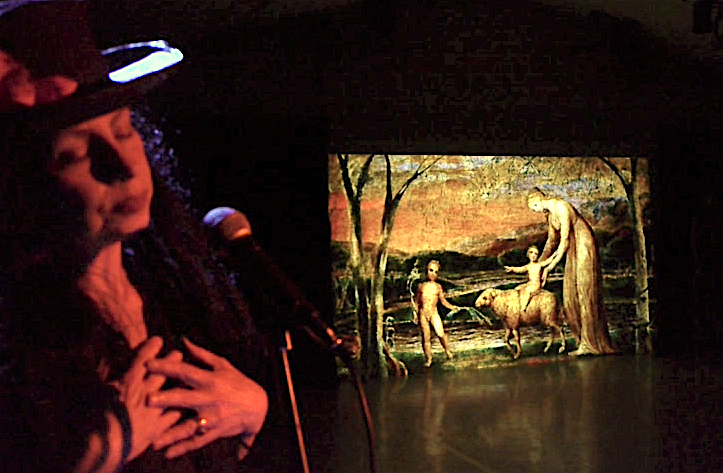 Jonnie Gilman: What do you mean by "embodied voice'?

Sylvi Alli: "Embodied voice" is, for me, a voice that is grounded, rooted, in the physical body. In my work, I have come to experience the body as a vessel for the voice to move through and resonate within. There is a noticeable difference in the resonance of a voice initiated from the belly, for example, and a voice initiated from their upper throat. This ties in with where one's awareness lies - are you singing/moving from the belly, or from the head? As a culture, many of us spend the majority of our waking lives "in our head". When the awareness moves further down the body, the vibrational quality of the voice deepens, producing a fuller, richer sound.

I also use the term "authentic voice" in the work that I do. This is the voice that emerges when we let go of the effort of the ego, when we find a place of compassion and acceptance of where we are in the moment, our natural voice, when we shift from being "the singer" to the one "being sung".

JG:What is your process? How do you help people find their "authentic voice"?

SA: My work with singers involves a number of levels, some of which are:

BREATH WORK and GROUNDING
I usually begin at the level of breath. Without good breath support, our voices can only strain and flail. Breath work is part of the grounding process that is crucial to this work, as well.

PHYSICAL ENGAGEMENT
The strengthening of physical connection, of "feeling one's body more deeply", is paramount for this work - rendering the body more open for the voice to resonate within. Stretching and core work are employed to increase flexibility and heat; exploration of physical expression encourages new access to the voice.

ENERGIES and SOURCES
Then there is the more mysterious part of the work that involves the person or group actively exploring various energy states and sources, and through this engagement, finding vocal and physical expression. This level of engagement can run the gamut from subtle shifts to intense release to new insights into one's true nature.

TONING and CHANTING
Toning is used in this work for a number of reasons - to connect voice with body, to explore vocal placement, and to express the voice without the added charge of words.

After individual exploration, an opportunity is created to sing as a group. I like teaching chants in this work, mainly for their devotional nature. Once we are opened up to more internal processes, chanting is a wonderful way to bring that energy into a focused expression through the heart center.


JG: In your teaching method you emphasize movement and physicality. What impact does body movement have upon the voice?

SA: Physical movement is utilized in this method primarily to increase one's connection to the body - by increasing flexibility, releasing tension, and raising physical heat. This process creates an environment in which the voice can reach deeper and stronger resonances, and, just as importantly, brings us out of the mental realm, into a purer, more accessible vibrational realm.

JG: Why/how does someone stifle their voice? What are the blocks to being able to sing?

SA: Since I have been doing this work, I have met so many women who share a similar experience of having been told not to sing. If they were in a choir, for example, they were asked to stand in the back, or just "mouth the words". Women, especially, have traditionally been taught to "keep quiet". These early experiences have had a stifling effect on self-expression, which singing is a form of. Looking deeper, this can effect self-expression, further effecting the sense of one's own value or worth.

Even if there was no early trauma of being told to "shut up", there is still the insidious influence of what is culturally accepted as sounding "good". Whether it is that critical voice that says your voice doesn't sound good enough, or the unreachable high standards that come from comparing one's voice to the voice of the latest "pop star de jour", buying into these false beliefs keep us from knowing and developing our true, natural voices.

When we sing from the body, rather than from the mind, another form of "listening" develops - a deeper listening that tunes into the interior landscape. This tends to replace the overly critical type of listening that keeps us separated from the purer essence of vocal expression.

JG: As you work with people who come to you for help with freeing their voice, have you noticed a corresponding transformation of other aspects of their being? Do personalities change?

SA: I have definitely seen this work have repercussions on many levels beyond vocal expression, from an increase in energy and emanation, to being able and willing to assert oneself more, to breaking down old rigidities. When we experience singing from our heart, there is a natural opening there. When we find the courage to sing from our gut, an increase of personal strength can occur.

JG: What are some of the changes you have noticed in the people you have worked with?

SA: One of the most common changes that I see is a lessening of self-consciousness. In one of my Embodied Voice class series there was a woman who, in the beginning, was very resistant to singing alone in front of the other women. At the final class, not only was she excited about singing for the group, she had even written her own song to sing. Also, I have often witnessed rigid ego structures softening in those who have done this work, bringing into being more flexibility and compassion.

JG: Is the desire to sound "pretty" or pleasing a block to vocal expression? Is becoming free from self consciousness and concern for outcome a part of the process?

SA: The lessening of self consciousness is a natural outcome of this work. As we strengthen our capacity for self-acceptance and compassion, another faculty of "listening", a deeper listening, takes hold. Greater access to the inner landscape develops through this non-judgmental environment, finding the fertile silence from which all sound arises. There is an aspect to the work that encourages a new way of registering one's voice, where we begin to "feel" our voice rather than "listening to the sound of our voice".

JG: How has your yoga practice and study of Northern Indian vocal music influenced your teaching?

SA: Having practiced yoga for many years has given me a foundation of physical discipline, as Northern Indian voice training has supported specific vocal development. But neither of these has influenced my embodied voice teaching nearly as much as the work I have done in a group ritual technology called "Paratheatrical Research" led by my partner, Antero Alli. It was through this work that I found a totally new approach to using my voice, and it was this experience that inspired me to further develop this process and share it with other women.

JG: Do you think that singing is an inherent human capability? Can anyone sing?

SA: I believe that if you can speak, you can sing. But in saying this, I have met some people who seem to be missing the ability to reproduce exact pitch. So, in the sense of expressing oneself vocally, that is what I mean - beyond what is more as "singing". Perhaps a truer way of putting it is, I feel that anyone who can speak has the ability to express themselves vocally with the singing voice. This does not mean that they will, not everyone is ready or willing to open up to expressing themselves in this way. But essentially, singing is a natural, effortless act.

JG: What has this work taught you? Has it influenced your own expression?

SA: That the more I can "get out of the way", the greater and truer my vocal expression becomes! I used to be a very self-conscious singer. The freedom and joy that I have found through this vocal embodiment process has been immense and has brought with it a greater expression of music "through me".

links to Sylvi's music and background 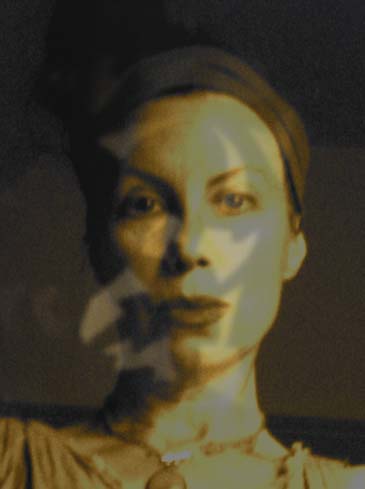